As the weather turns cold and we head into winter we know there are a lot of things to do at MSU coming up. Sure there is the holiday season but for us, the fans of the Michigan State Spartans, we know this time means the start of college basketball. Here we have an exciting guest blog from one of our friends in the Greater Lansing hospitality community, Kristin Porter. When you read this you'll know Kristin not only knows the hotel biz, she knows her basketball. Take it away Kristin and LET'S GO STATE! 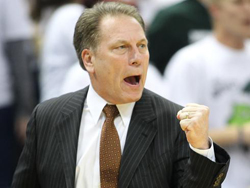 Coach Tom Izzo is ready once again to lead the Spartan Men into Battle.

The thunderous jumping of the Izzone crowd, smell of roasted almonds and chilly temperatures can only mean one thing. It's basketball season. The Spartans' first two victories, exhibitions against Grand Valley State and Indiana-Pennsylvania, set the stage no doubt, for what's to come this season. Senior Guard, Keith Appling, although a relatively quiet leader, was the team's top scorer in game #1 with 17 points, also shooting 5-7 from long range. In game #2, a newly-built Gary Harris led the scoring with 21, also shooting 5-7 from the 3-point line. With Travis Trice hitting 4 three's in game #1, Adreian Payne connecting from downtown and drought-ridden Russell Byrd warming up his shot, Spartan Basketball fans can look forward to more reliable 3-point shooting this season. Coach Izzo seemed to take a special interest in Denzel Valentine's ever-improving guard play, in two endearing coaching moments, leaving both with smiles and hugs. The new faces from the state of Illinois were just as exciting to watch. Freshman Guard, Alvin Ellis III came away with solid contributions in his first two games. Gavin Schilling, a Chicago native, is an impressive physical specimen, mirroring the fitness of arguably the most athletically-gifted member of the team, Branden Dawson. His free-throw shooting, however, needs some serious work if he's to be a useful presence in the paint. Put November 12th on your calendar because this will be the first and possibly toughest test of the season, as the team takes on #1 ranked Kentucky in the Champions Classic in Chicago. A match up which is right up there in stakes with the North Carolina game, scheduled for December 4th at the Brez. And don't forget Ohio State, Indiana and Michigan are all coming to East Lansing this season, making at least 5 games against pre-season Top-25 teams. All-in-all, without getting ahead of ourselves, I believe the Spartan Nation is in for a tense but amazingly successful season, worthy of its pre-season #2 ranking. Looking to see the Spartans first hand this season? Get on StubHub...MSU's Official Fan to Fan Ticket Marketplace. Tickets, depending on the game, range from $2 to over $100. Other hints for game-going include catching the shuttle from MSU's Ramp 5 (near Police and Public Safety). Parking is free and the round trip shuttle to Breslin is only $4 per person. So get excited Spartan Fans...it's going to be a fun ride.